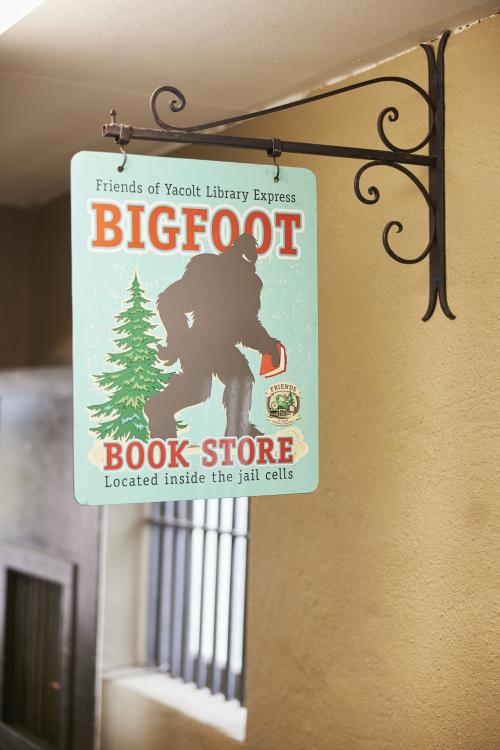 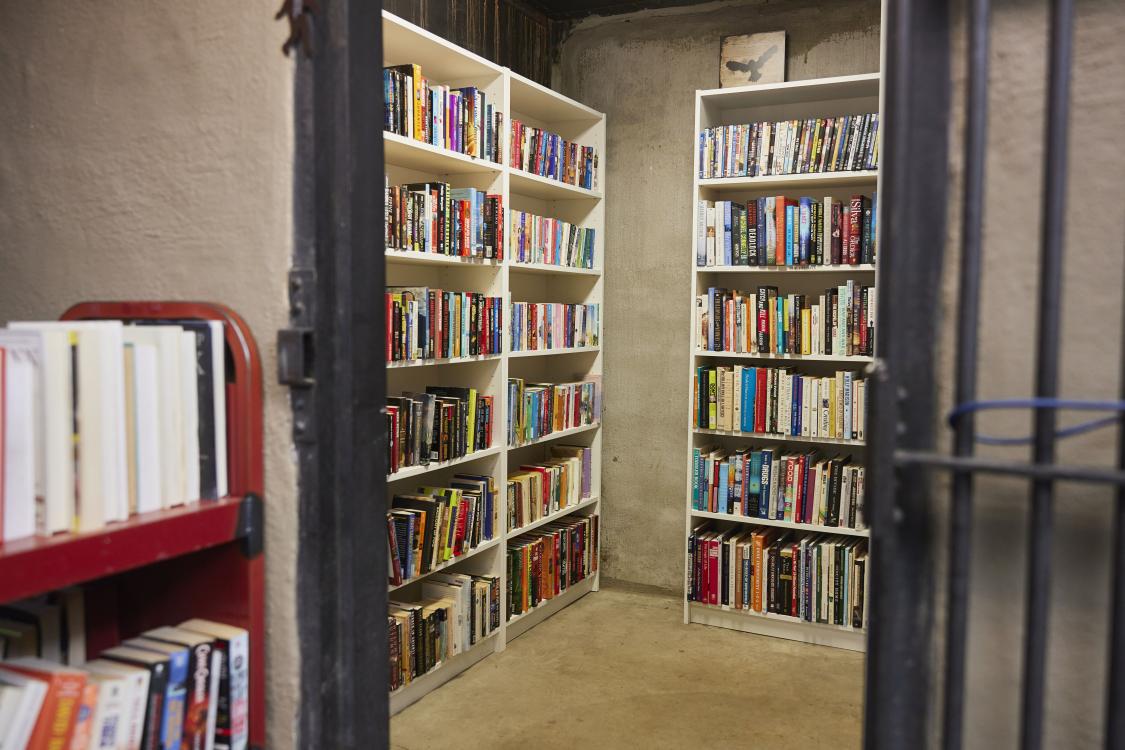 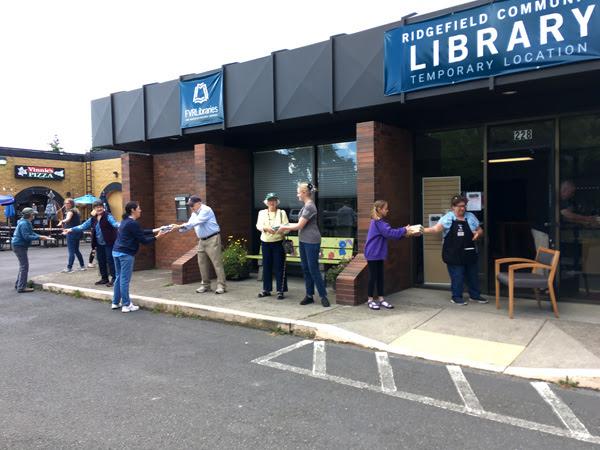 A band of intrepid volunteers passes books to to the new Ridgefield Community Library, June 5, 2021. 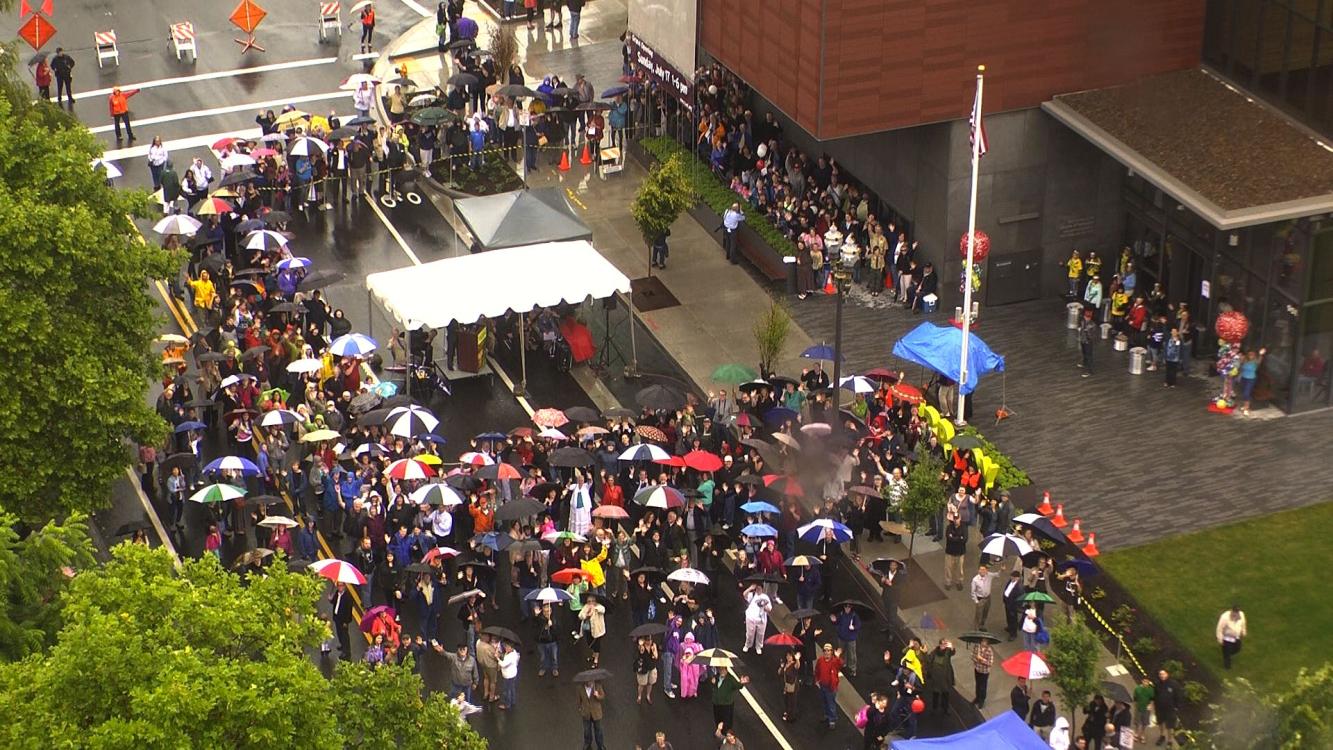 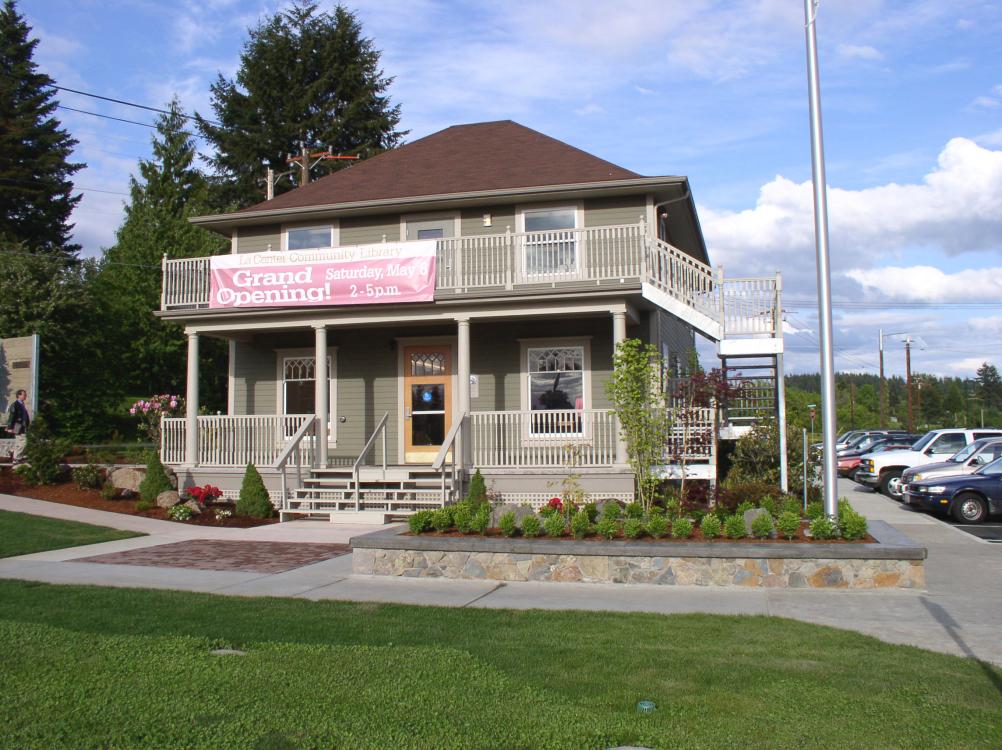 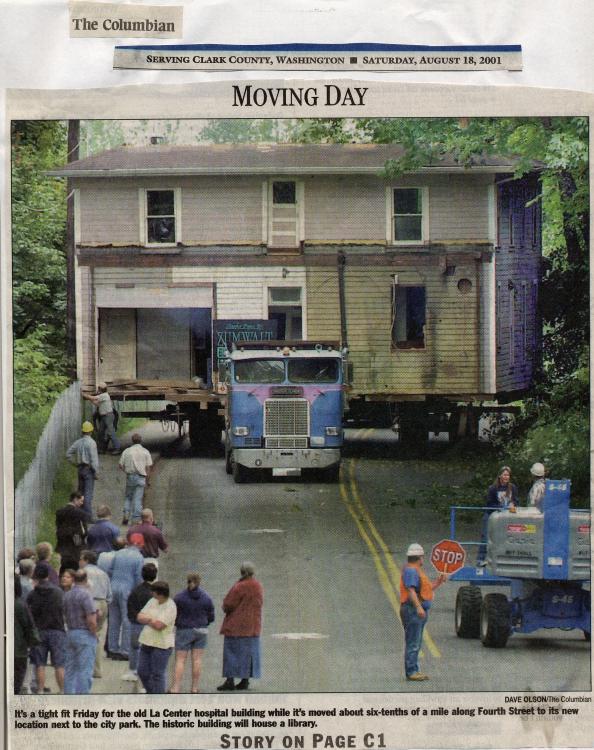 Community members look on as the former La Center hospital building commences its voyage to its new location next to the city park, and its new life as the La Center Community Library building. 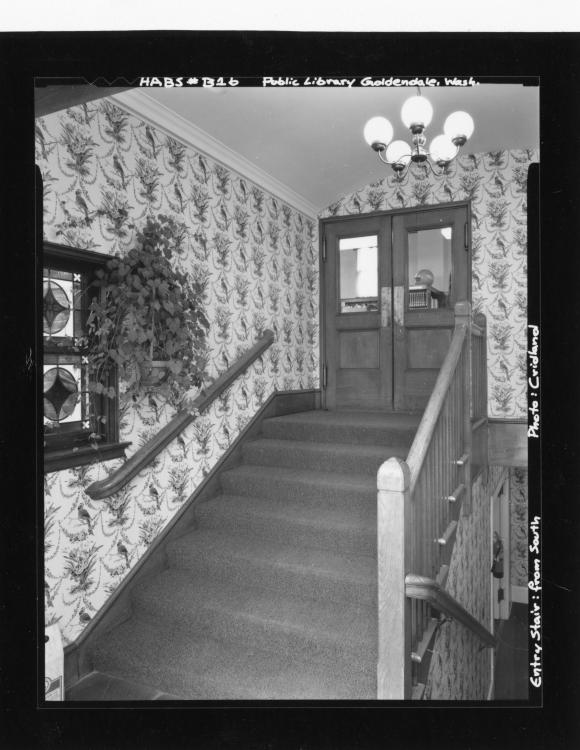 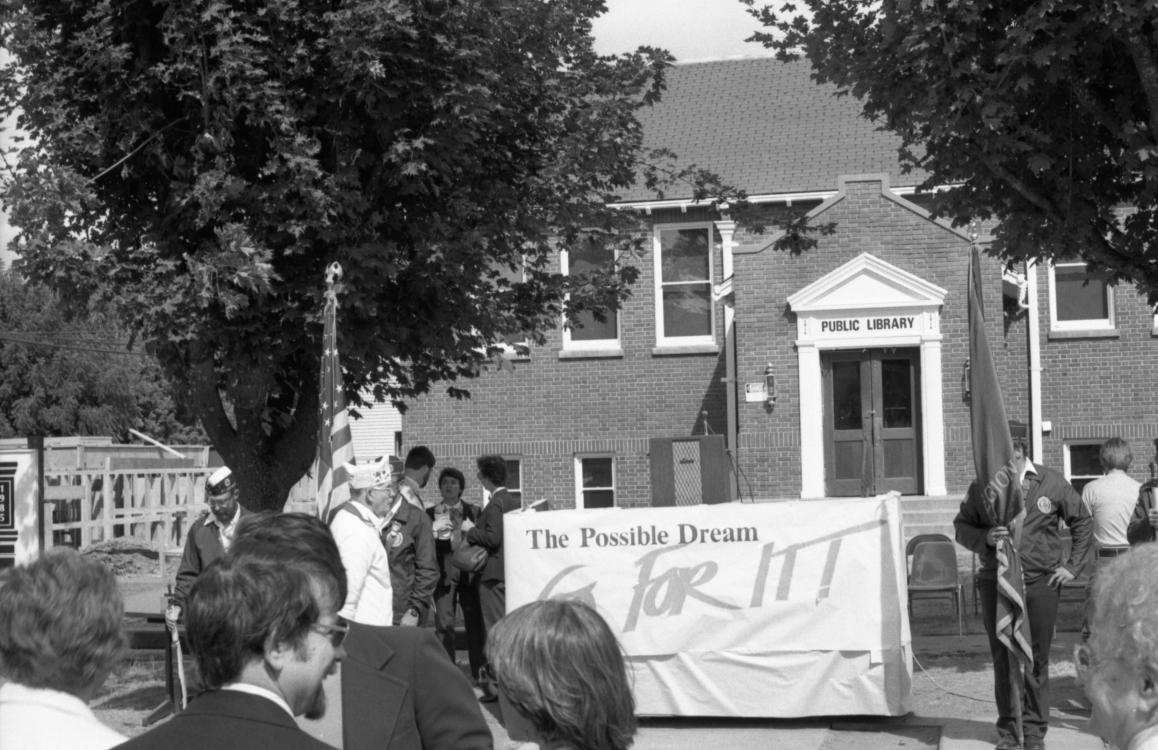 The Possible Dream: Go for it! This was a beginning of the big remodel that added East and West wings to the original Carnegie building. 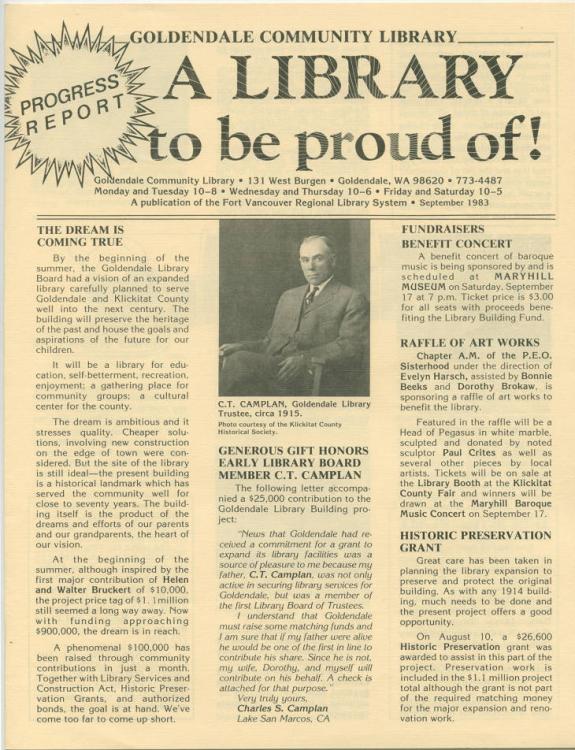 A library to be proud of! 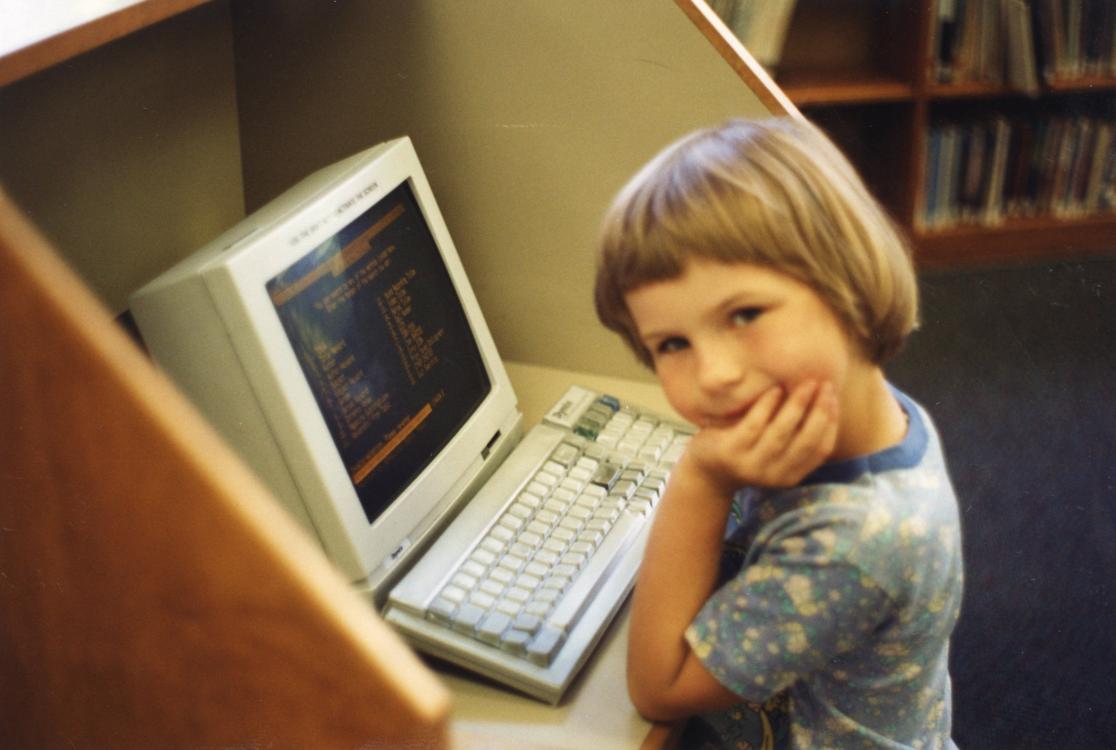 A child uses a computer at Vancouver Community Library, circa the 1980s (check out that machine!). 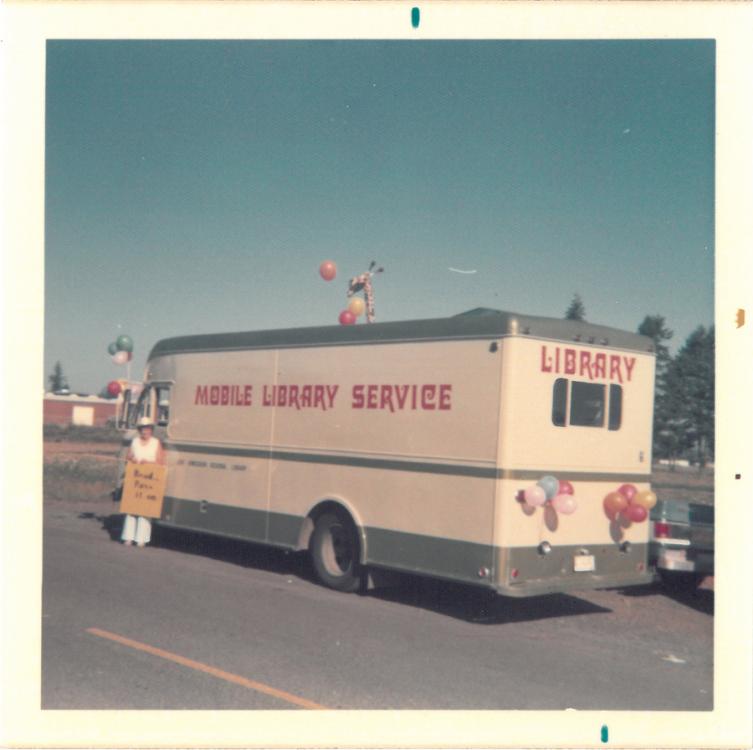 A bookmobile, balloons, a friendly giraffe....what more could you need? 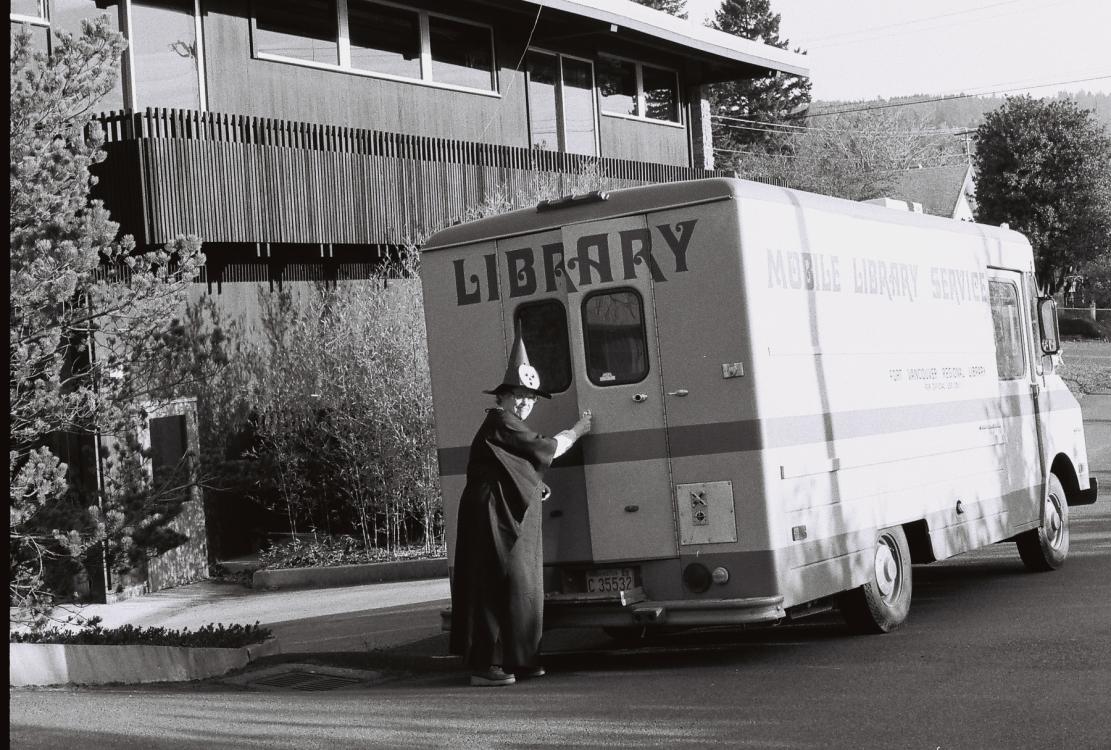 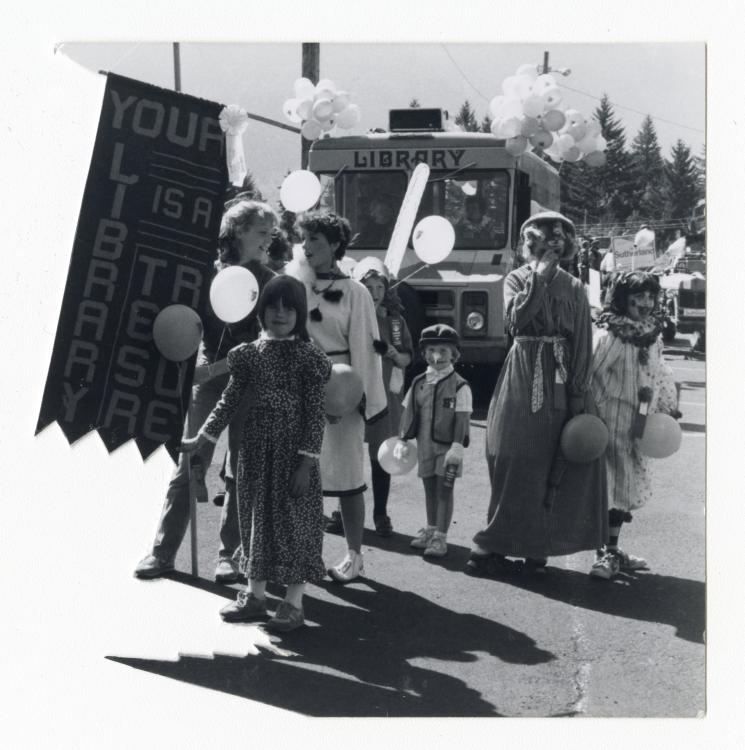 Bookmobile Parade in Stevenson, circa 1970s

Your library is a treasure! 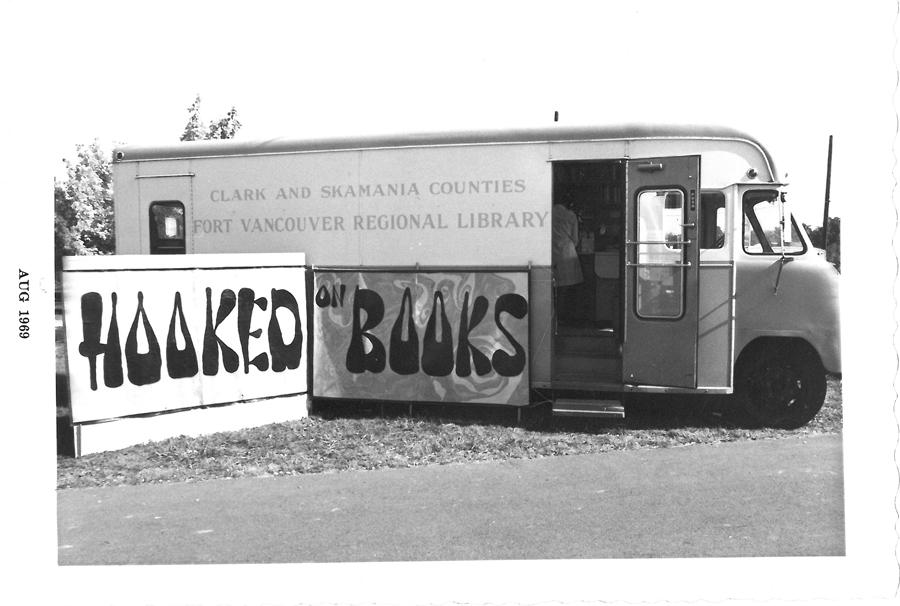 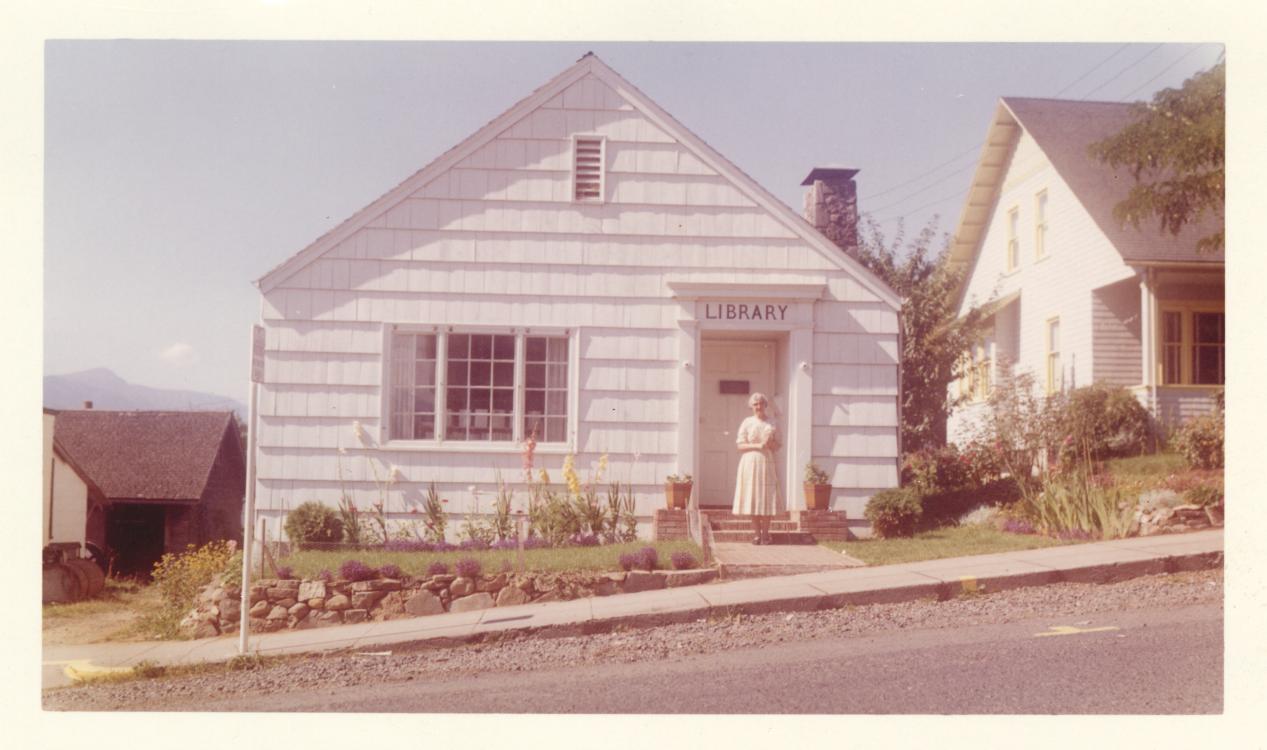 Librarian Grace Jones stands in front of the old Stevenson Community Library. She was retired by 1967, when the present building opened. 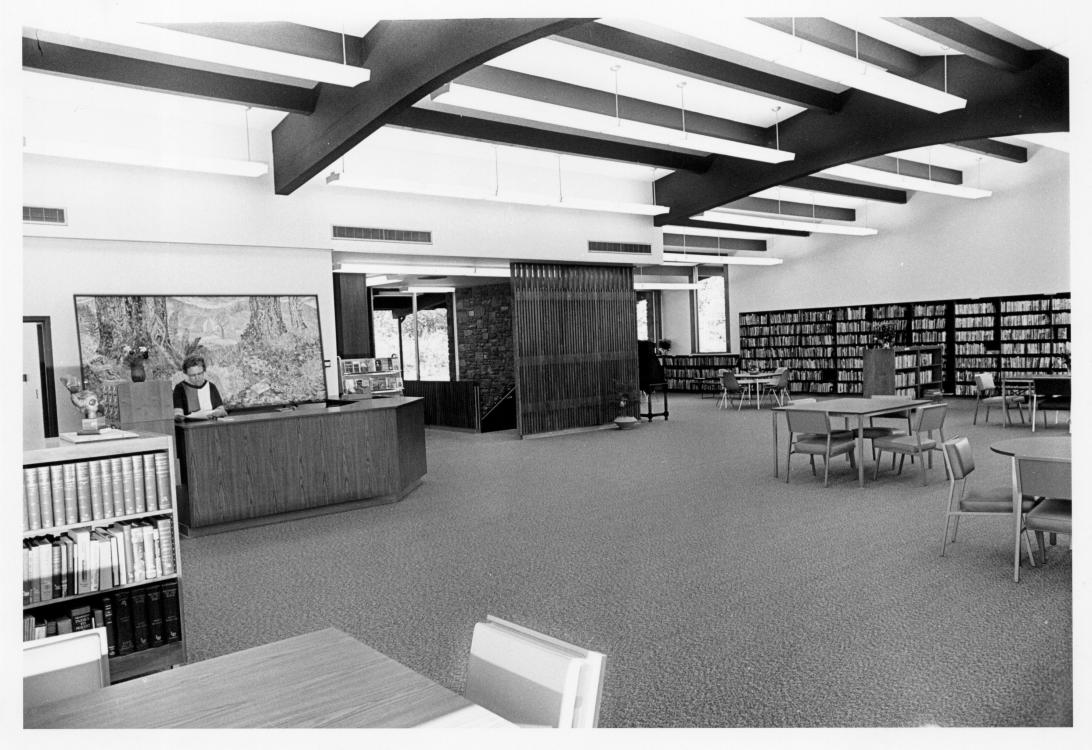 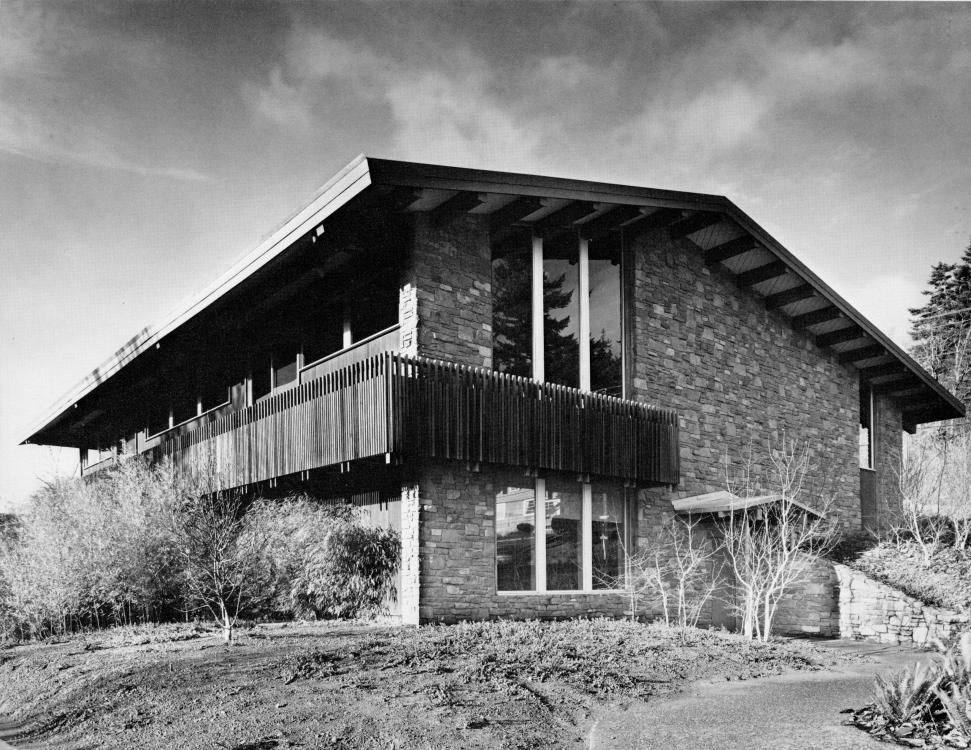 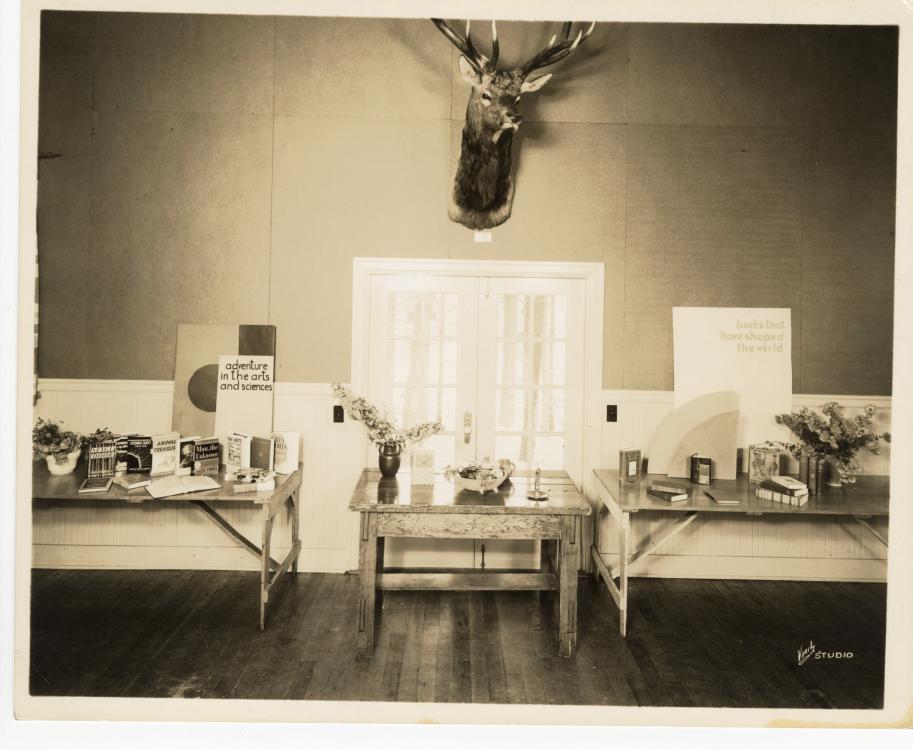 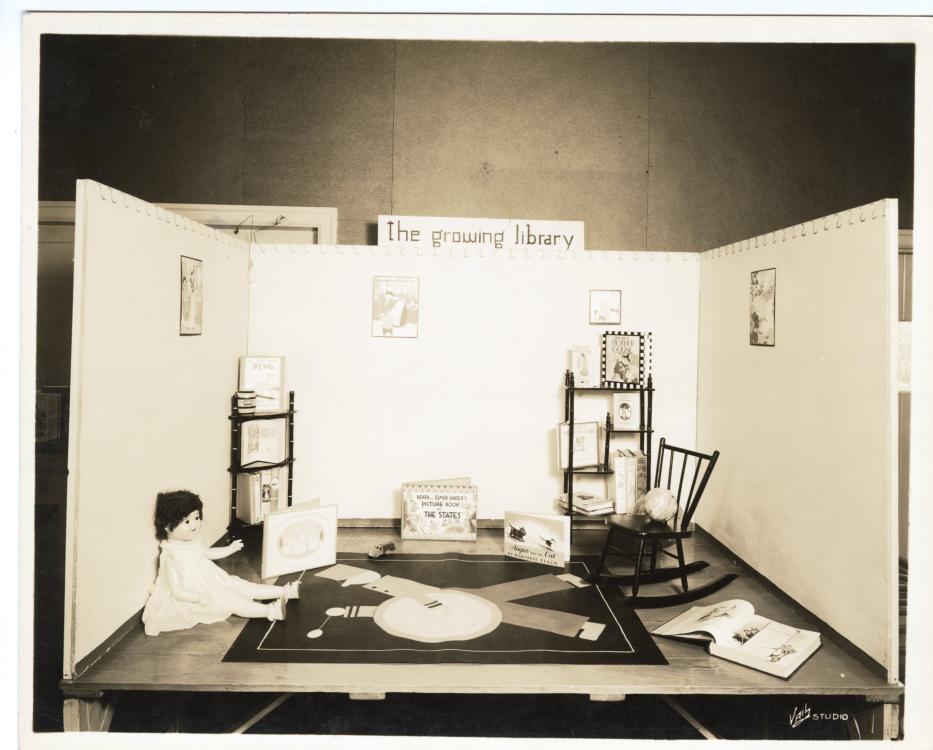 A diorama on display at Stevenson Community Library, many moons ago. 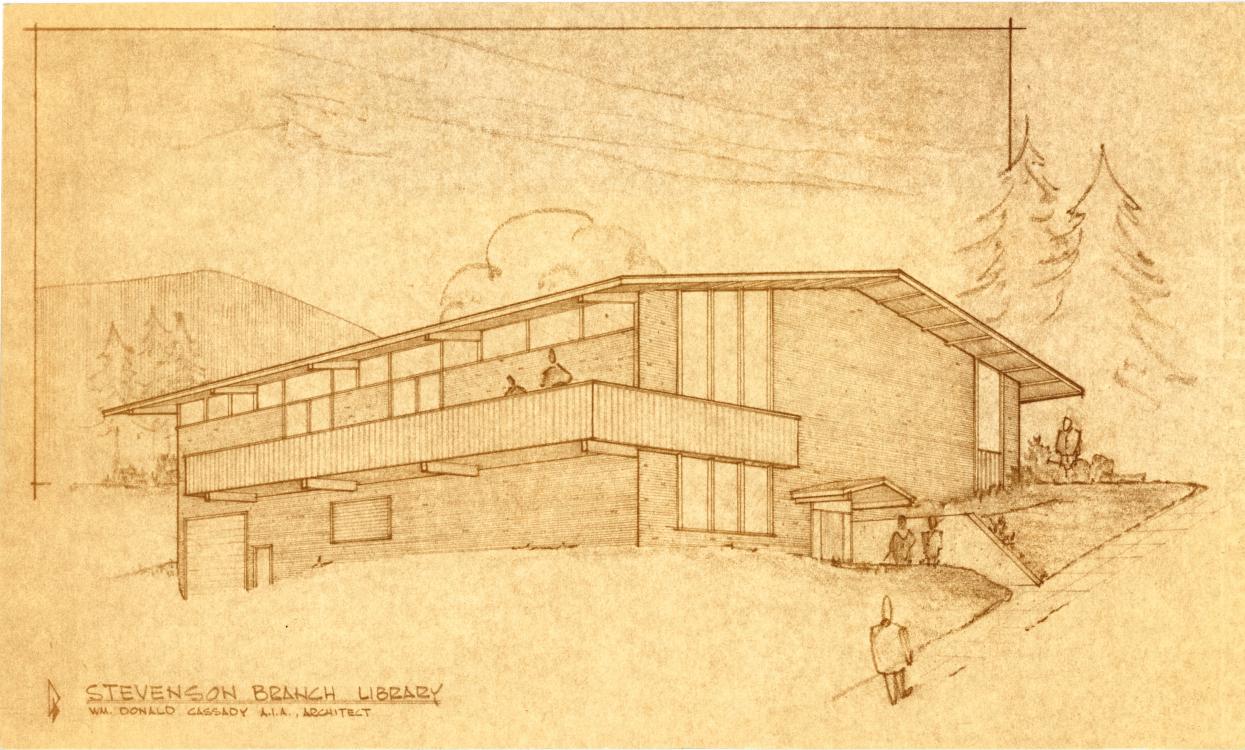 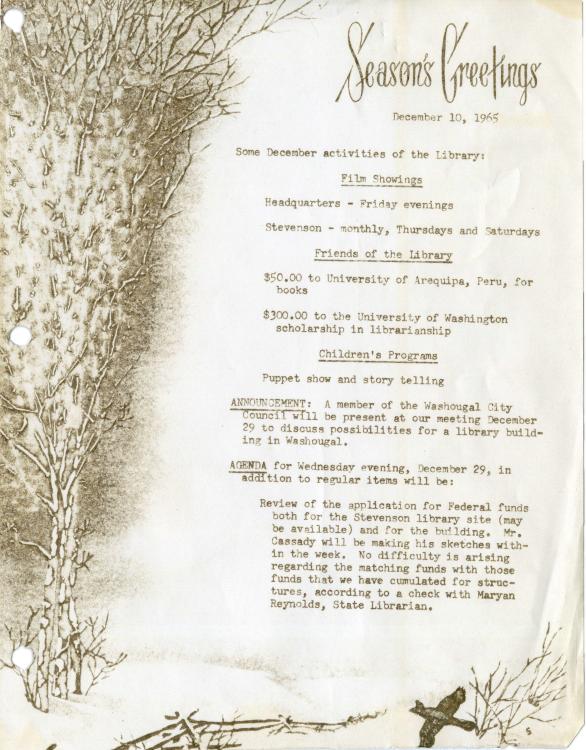 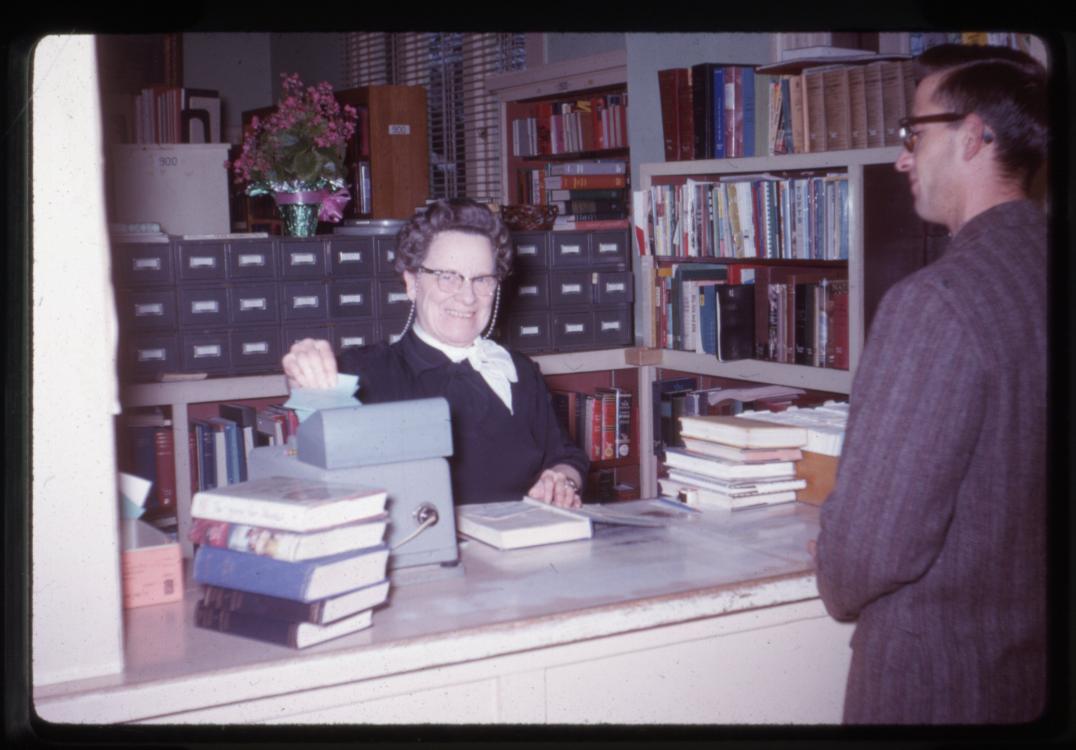 A Carnegie Library staff member checks a book out to a patron, circa the early 1960s. 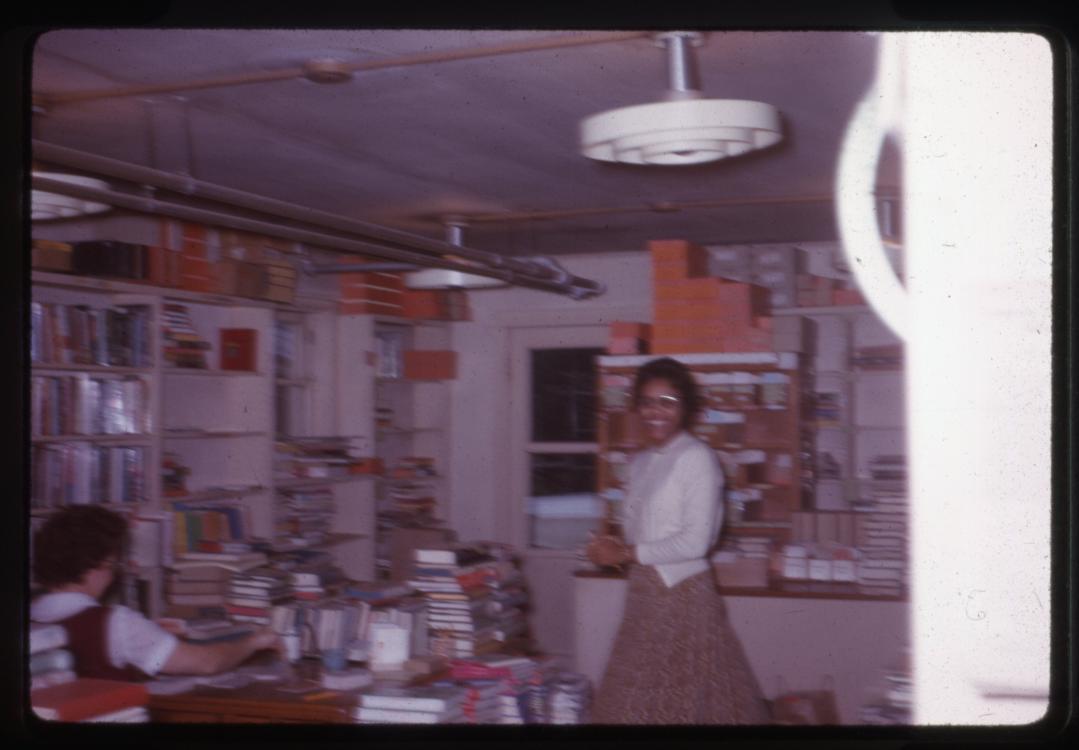 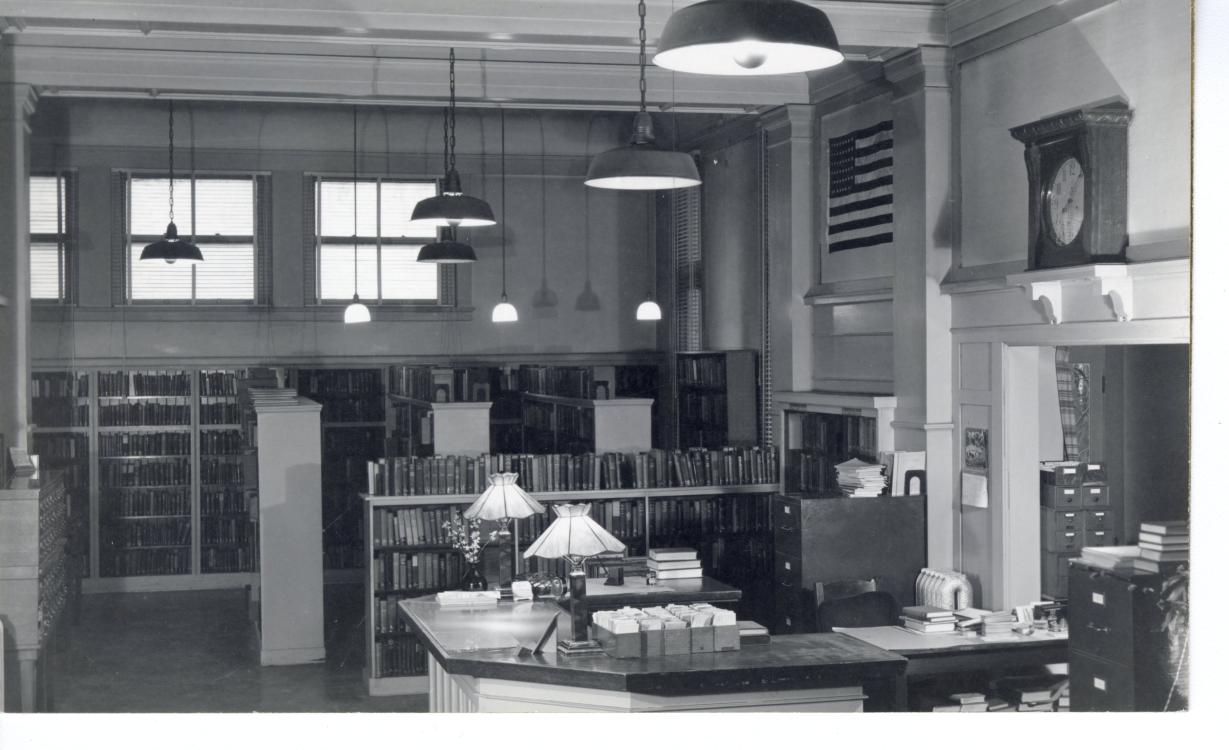 The interior of Carnegie Library, featuring the stacks and circulation desk. 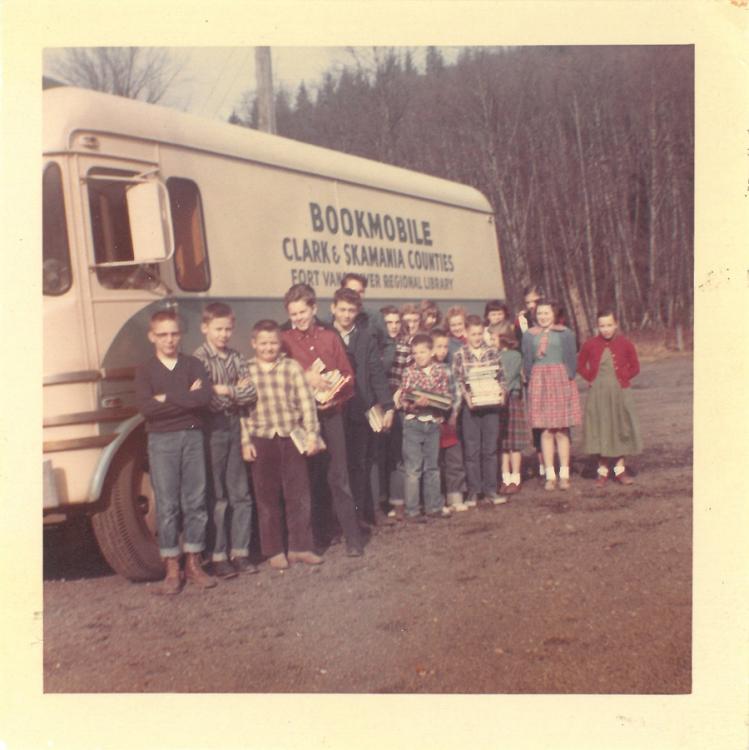 In the early 1960s, the bookmobile was a popular visitor to the Yale School. 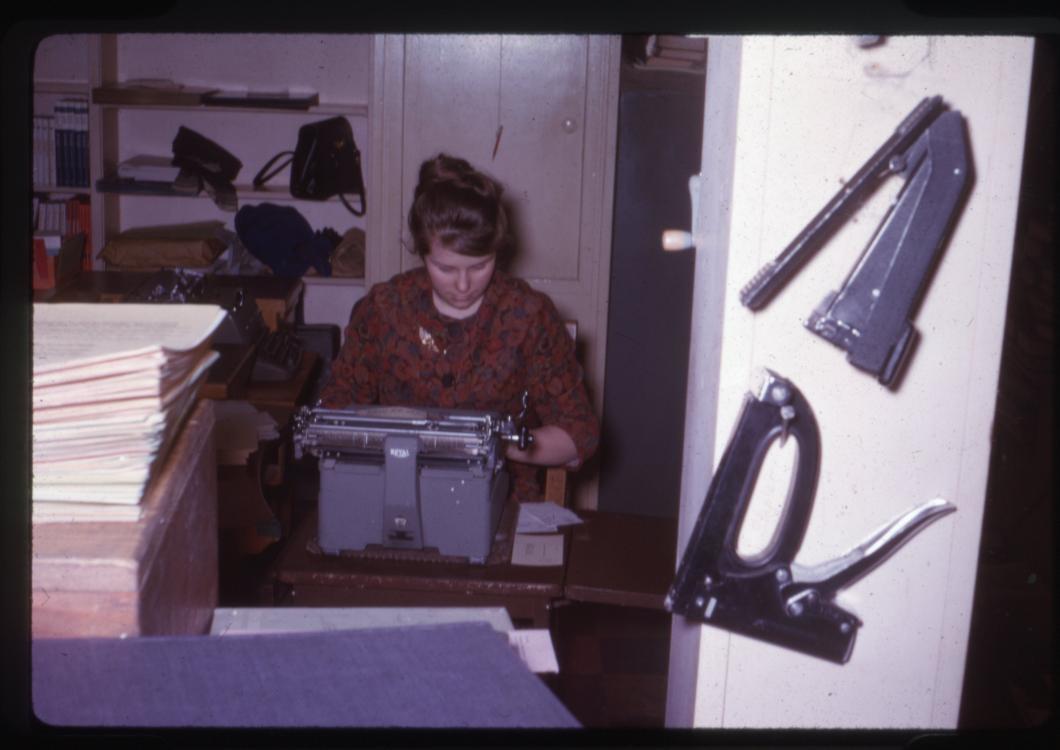 A Carnegie Library staff member toils away at the typewriter, producing cards for the catalog, circa the early 1960s. 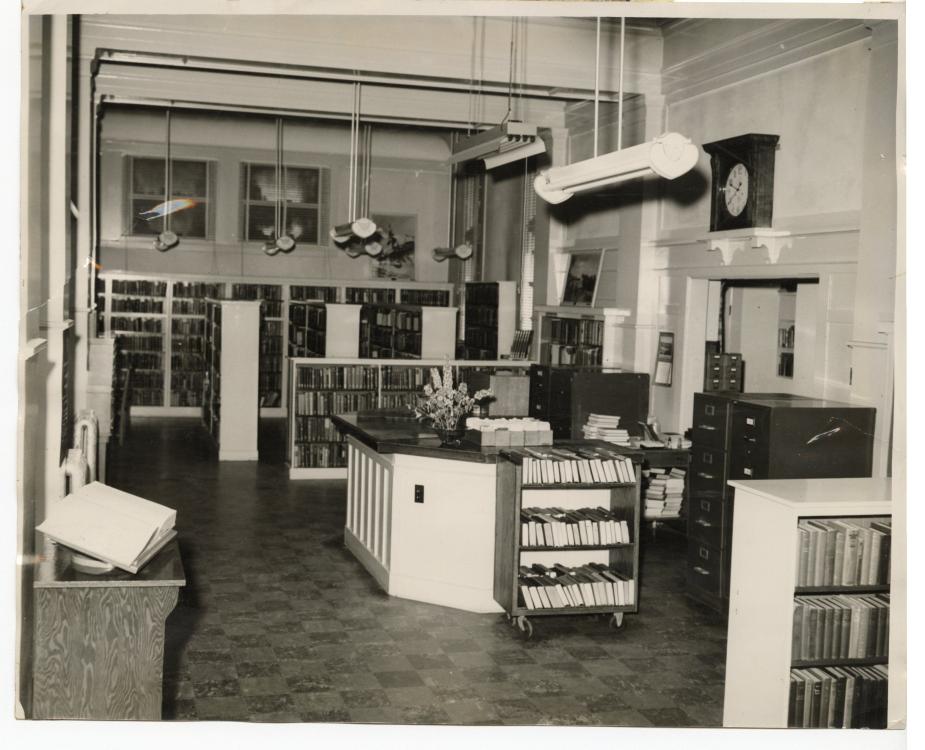 The Carnegie building on 16th and Main streets was built in 1909. The library closed in 1963, when the library on Mill Plain Boulevard opened. 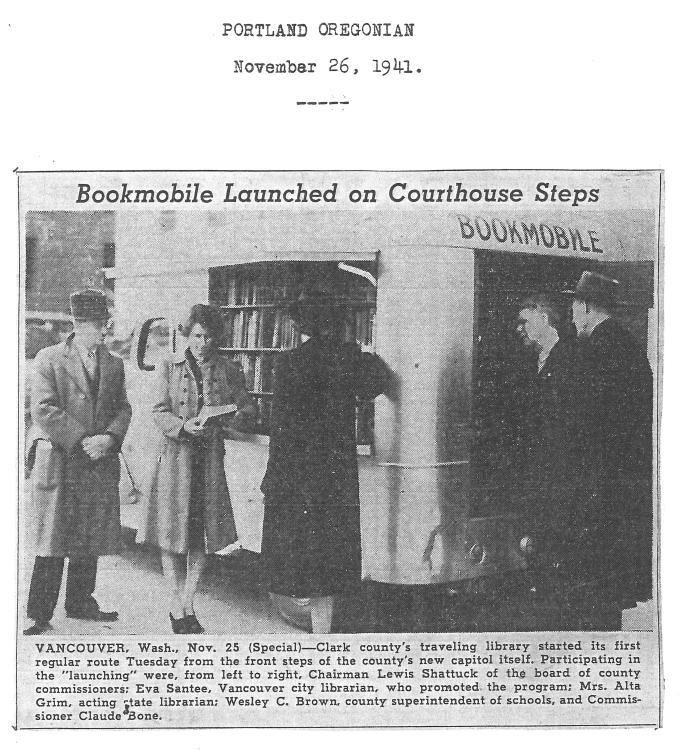 An article in the Portland Oregonian about the launch of "Clark County's traveling library," dated November 26, 1941. 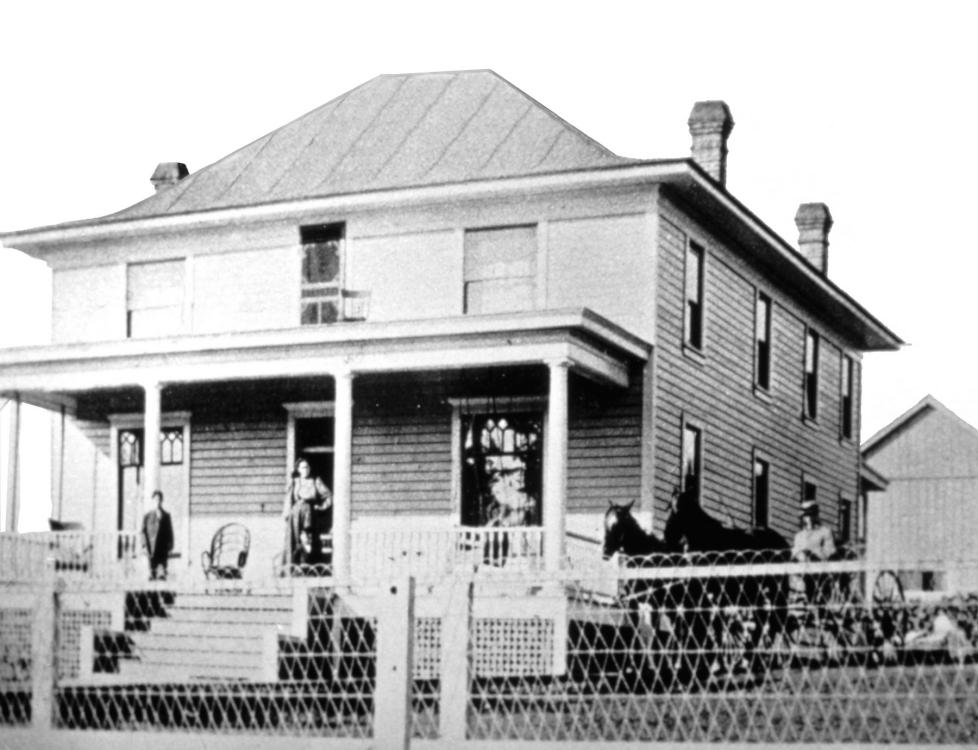 The La Center Community Library building in its previous life as a hospital, circa 1905.

Click on the image title to see the full-sized version.

Early libraries in our area

The very first library in the Pacific Northwest was established by the Hudson’s Bay Company in 1833 at Fort Vancouver. Requests for books and periodicals were sent to the company’s headquarters in London. This subscription library remained in operation for 10 years and books were loaned throughout the region. After it was discontinued, other efforts were made to provide a subscription library in the area. One was located on the grounds of St. James Mission in 1865, organized by the Vancouver Catholic Library Association and later run by the Vancouver Library Association. This library moved several times; it was located over Maxon’s Store in 1878, then Weigels Store the following year.

Meanwhile, one other early library was established in Union Ridge (now called Ridgefield) in 1868, as a Sunday school library.

The first free public library in our area was started in 1891, when the Women’s Christian Temperance Union petitioned the City of Vancouver for a tax-supported library. The City Council approved this and appointed a board of trustees. In 1908, a Carnegie grant was secured for construction of a library building. Vancouver Public Library opened on December 31, 1909 on the corner of 16th and Main Streets, on a lot donated by L. M. Hidden.

During the early 1900s, many other libraries were established throughout the region.

In November 1940, teachers from several school districts in Clark County got together to discuss combining funds to buy and share books among the schools. Vancouver Public Library staff agreed to select, process, and distribute the books, which would be owned by the schools. Soon there was interest in expanding this resource so there would be books for adults, too. This set the stage for developing regional library services.

Eva Santee was hired as librarian for Vancouver Public Library in 1940. “Library service for all,” was her motto as she began to expand the reach of the library to underserved areas. In 1941, Eva worked with Washington State Library to secure a Works Progress Administration grant that provided funding for a bookmobile, driver, librarian, and collection of books. Vancouver Public Library contributed space in its basement and additional books from its collection. The rural schools book pool was also incorporated into this collection and there were other contributions from the community to help pay for the service. Bookmobile service throughout the county began on November 18, 1941, and was an enormous success. Skamania County expressed interest in participating, so service was expanded to cover both counties.

Knowing the WPA grant funding would end, interested residents circulated a petition during the summer of 1942 asking the Clark County commissioners to place a measure on the ballot to establish a rural library district. This request was granted, and that November the voters approved formation of Clark County Library, the first rural library district in the state. A board of trustees and librarian were appointed and the new system went into operation in April 1943. Local taxes now paid for bookmobile services and Clark County residents also had access to Vancouver Public Library.

By 1945, Eva Santee was leading discussions about forming a larger library district by merging Vancouver Public Library and Clark County Libraries. It took five more years, but Eva stuck with it and on July 1, 1950, Fort Vancouver Regional Library District was born. Skamania County joined FVRLibraries in 1952, expanding the district’s service area to 2,500 square miles. The district had six outlets at that time: Battle Ground, Fruit Valley, McLoughlin Heights, Stevenson, Vancouver, and Washougal. Other milestones from Eva’s time include:

1833: The very first library in the Pacific Northwest is established by the Hudson's Bay Company at Fort Vancouver.

December 31, 1909: Vancouver Public Library opens on the corner of 16th and Main streets, on a lot donated by L. M. Hidden.

1912: The Women’s Association of Goldendale establishes a library in the grammar school.

1913: Land is purchased for a library building and a Carnegie grant secured. Local fundraising helps pay for construction, and the library opens on March 15, 1915.

1914: The Priscilla Study Club forms in Ridgefield. They open a library to the public in City Hall in 1923, and in 1934 they move it into the Priscilla Building (a house located a few blocks from the current Ridgefield library).

1921: A library is founded in Stevenson in through the Stevenson Woman’s Club. In 1938, a building is constructed on Russell Street to house the library.

1924: The Washougal Women’s Club organizes and soon after establishes a reading room and a circulating library in the back of the Carpenter General Store on Main Street. In 1930, Mrs. Mabel Moody wills her house on "E" St. to be used as a library and clubhouse. Later, the library is given to the city.

1926: Public library service is established in Woodland, in the building that currently serves as the Woodland Community Library.

1929: The White Salmon Woman’s Club founds a library, operated jointly by the city and the club.

1974: The books-by-mail service is introduced.

1982: What is now known as White Salmon Valley Community Library is annexed to FVRLibraries.

November 1983: "Library at Vancouver Mall," as it is first known, opens.

May 2009: A new library opens in Battle Ground, made possible by district funding and private fundraising by the district and Friends of the Library.

2011: The new Vancouver Community Library opens at 901 C St. All district support operations are consolidated in the old building on Mill Plain Boulevard.

2015: Free return postage for books by mail is introduced.

December 2021: FVRLibraries finalizes the purchase of the building at 2018 Grand Blvd from the City of Vancouver, to be remodeled into a new Operations Center for the district.

2022 and beyond: New libraries for Washougal, Woodland, and Brush Prairie are in the works.